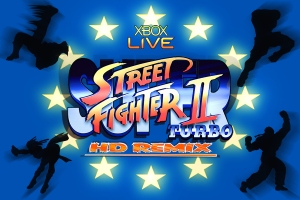 This Super Street Fighter 2 Turbo HD Remix tournament is only open to “newcomer” European XBox Live players. If you’re in America and are interested in playing something like this, please check out the WWL instead! 🙂

I’m defining “newcomer” very loosely though. Bascially anyone who’s won my tournaments before, or won over 50% rate at my tournaments or pool matches before isn’t allowed to enter. The idea is to get more people interested in playing in a (slightly) more competitive environment, but without people feeling like they have no hope to win.

When: This coming Sunday 13th JUNE, 3pm (15:00 GMT) start. These tournaments usually take around 2.5 hours, but it could take longer, so please be committed to play all afternoon and into the evening if necessary due to numbers.
As with last time, if you are not on XBL at the start time, I will consider you to have dropped from the tournament. It will usually take 5-10 minutes for me to randomise the first round bracket and message everyone with their matches. The first round always takes the longest due to no-shows etc, so please be patient. 🙂

Signup by Saturday 12th JUNE by posting here or on the SRK forums to participate, or by messaging me over XBL. Please do not signup until you are 100% sure you can play on the date/time above.

Some late signups on the day MAY be allowed, but I cannot guarantee it at this time, it will depend on number of entrants.

Standard Double Elimination format. The number of signups will decide the exact nature of the event. Assuming we get 16 players or less, there will be a 16 player double-elimination bracket with first round Byes assigned as necessary at random (no advantage given based on prior performance).

Each match will be a single best 3 of 5 rounds game (ie: the standard HDR “Ranked Match” setting).
All settings must be on default.
Akuma (Gouki, Demon) is banned.
You can pick any character to play (ie: the standard HDR blind pick). You are free to change character between rounds if you wish.
‘Turbo’ functions on joysticks or controllers are banned.

I recommend using a private 2-player match room on XBL. I will attempt to add all participants to my my XBL Friends List (which is visible) and also to the SF2HDR EU account Friends List so you should be able to find each other and invite each other into games easily.

Once your match is completed, BOTH participants must report their results over XBL message to me. All results will collated and later be posted here. Sadly I have not found a good way I can possibly report in real-time whilst also keeping the rounds running smoothly.

As usual, I only need to know who won and who lost, but if you want to report game-round scores or characters used etc, go ahead. If I only get a single report I will consider it accurate (eg: only the winner reports).

In the event people do not play, or there are discrepancies and disagreement in the results reported (or not reported), or any other kind of complaint reported, I will attempt to manage that. Worst case scenario I will have to void the whole event if players do not co-operate, but I’m glad to say we’ve not had any problems yet at all.

Each tournament round if possible certain matches may be highlighted to be videoed by any player with available video equipment (usually ScarGfx 360 or Sharizord). If this happens we will create a private player room with extra slots for the observer(s) and invite the actual participants in. I will post all results and links to any videos later. Videos will be posted at the SF2 Europe youtube channel.

Tournament was played as a Round Robin tournament instead of Double Elimination, the winner was Tschesae with 6 wins, and 2nd place was JoeDaRipper with 4 wins. Congratulations. 🙂

Writer about competitive gaming for agoners.wordpress.com Contributing writer about tabletop gaming miniatures for collectinggreen.home.blog View all posts by Remy77077

This site uses Akismet to reduce spam. Learn how your comment data is processed.

Here’s a collection of gaming related sites that interest us currently here at Agoners: